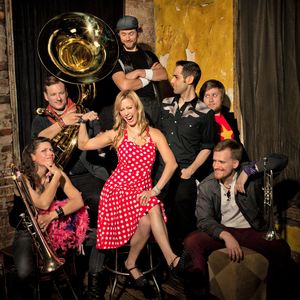 Brassy Washington DC-based outfit, Black Masala, is part of the new generation of go-anywhere brass bands. You can hear this sound all over the world now – from New Orleans (Hot 8) to Belgrade (Boban & Marko Markovic), Paris (Fanfarai) to Cotonou (Gangbe Brass Band), and right here on the ...

In 2015 Black Masala released their second studio album, I Love You Madly as well 3 volumes of remixes featuring DJ's from all around the world.  I Love You Madly was well received and reached #2 on the CMJ World Chart and #4 on Canada's national Earshot radio chart.

On their second album it is clear that Black Masala are having a lot of fun incorporating various musical influences into their go-anywhere Brass sound.  Ranging from Gypsy punk, Balkan brass and New Orleans funk, to Bhangra and bounce, this is an album for the multicultural music listener.  The heavy horns and danceable rhythms tie “I Love You Madly” together and create an album that can be played for a wide range of audiences.

Whether they are performing live shows or releasing new music, Black Masala push the boundaries between genres and explore new musical frontiers. This unorthodox and highly creative approach is what makes the shows so much fun with a wild and unpredictable vibe for the audience.

You want to have a good time? You need brass.

This is what DC’s Black Masala blasts to the world, harnessing all the good times sunk in the Romany, second-line, bhangra, and funk horn parts that have gotten huge swaths of the planet up and dancing. With rock drive and a willingness to be as weird and wonderful as the party demands, Black Masala woos fans and new listeners with Trains and Moonlight Destinies (Release: October 26, 2018) tribute to the ins and outs of love, fate, and wanderlust.

The band evolved from a duo project in drummer and vocalist Mike Ounallah’s basement. “I got together with a trombonist friend of mine because we were both obsessed with gypsy brass music from Romania and Serbia,” he recalls. They studied the repertoire, one that reminded Ounallah of his childhood listening to his father’s Arabic pop records.

It just got crazier from there. The duo expanded rapidly, finally finding a stable roster of skilled players and the instrumentation that captured the full energy of the music they loved. Along the way, they recruited versatile, gutsy vocalist Kirsten Long and everything from a tuba player to an electric guitarist.

They kept at the Balkan and Romany music, as “Chaje Shukaje” testifies, a cover of rousing number by Macedonian musical icon Esma Redzepova. They also expanded into new sounds, exploring other styles with brass at their core. “Once we got a full horn section, we could really dive into other genres,” explains Ounallah. “It’s a hodge-podge of influences, but our emphasis is really on the songwriting and an all-out dance party at shows.” Black Masala’s originals hit both elements head on, telling stories of powerful women, rascally dudes, raucous nights, and life on the road that are tinged with a hint of the fantastical, as the video for the title track reveals.

Pushing these tales forward are the horns, arranged by Ounallah and trombonist Kirsten Warfield. The horns add a slinky, strong, driving presence on our songs and play an upfront role in the songwriting,” Ounallah explains. “To play horns in Black Masala, you have to have your foot in a number of styles. We draw from anything that comes to mind so we’re fairly limitless in our approach.”

The stylistic openness can be heard all over Trains and Midnight Destinies. “Midnight Bhangra” takes cues from Punjabi-infused South Asian pop with a hearty dose of club music and synthwave, like Red Baraat jamming with Trent Reznor or Lazerhawk. “That’s my favorite track on the record,” laughs Ounallah. “We tracked each drum separately, working fast and just doing one take, each for a few minutes. We didn’t want any fills. Then we put the track together in an hour and added these spacey vocals,” over the bhangra bounce.

Sometimes, however, you need to slow it down to keep the party going. Channeling that universal poignancy of unrequited love, “Tell Me Again” plays that crucial role, a bittersweet answer to the slow dance. “We sat down at the piano in our rehearsal studio and came up with new harmonies and melodies, while we were playing around,” Long says. “It’s more melancholy, about missing someone and unrequited love. It’s downtempo but really driving with a groove.” Long, her voice always soulful, really digs in.

The whole band brings everything to their live shows, which have gained a bit of a reputation for their fever-pitched intensity. “We come out into the crowd, with horns surrounding everyone. We make the live show as interactive and entertaining as possible,” Long notes. “We’re always playing around with our songs, remixing them and working in covers,” everything from The Band to Gogol Bordello, “that we make our own. There’s something for everyone. Maybe you vibe with second line or funk or bhangra, but we try to make sure you can enjoy it all.”

“I love going to a show and being excited about it,” exclaims Ounallah. “I can’t wait for our shows, when we can get up there and just go wild.”